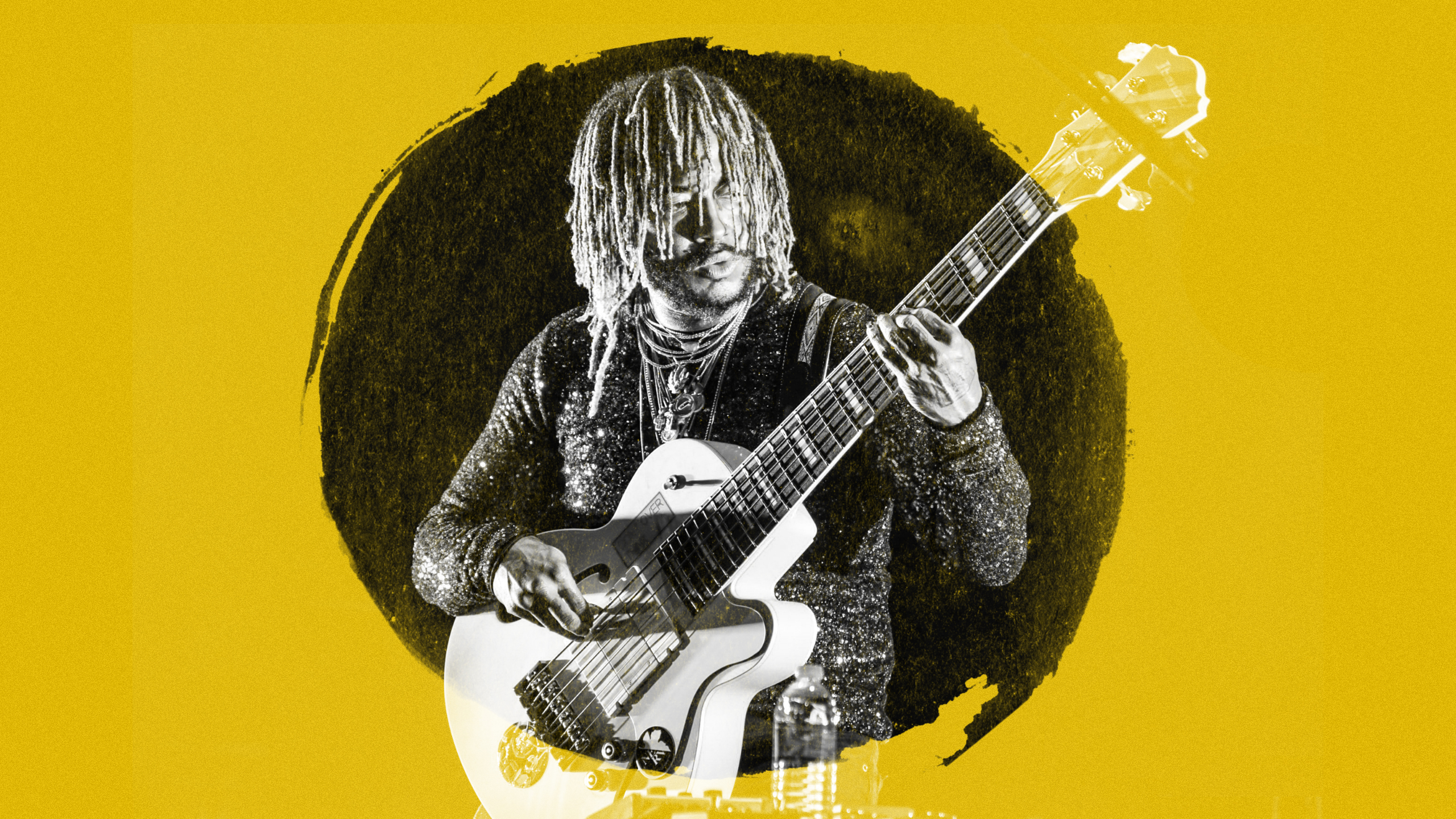 As a genre-blurring bassist in multiple genres, Stephen Lee Bruner a.k.a. Thundercat is bored to tears by virtuosity for the sake of it. “[For me], it’s about writing songs instead of attacking a moment and trying to say everything at once,” he told Bass Player in 2020, citing his influences as Michael McDonald, Kenny Loggins, and the Bee Gees — not the self-indulgent slap-meisters prevalent in his lane.

Not that Bruner didn’t absorb the bass greats. “I learned by listening to Jaco and Stanley Clarke and Marcus Miller,” he recalled to NPR in 2013. But through his prodigious body of work as a session cat and as a solo artist, he’s developed a style that only loosely owes to any of those players — not to mention an acuity as a singer, songwriter, and arranger.

“As time progressed, my songwriting developed out of my bass because that’s all I could do,” Bruner told Interview Magazine in 2013. “I decided to take it as far as it could go and to use my skill as a tool.”

Thundercat‘s latest album, It Is What It Is, which was released today (April 3), continues his impressive arc, and its evocative earworms like “I Love Louis Cole,” “Black Qualls,” and “Dragonball Durag,” show that the 35-year-old phenom may only now be hitting his stride.

After an early stint in the quartet Young Jazz Giants (which featured Kamasi Washington) and with L.A. thrash-punk pioneers Suicidal Tendencies, Bruner appeared on albums by Flying Lotus, Erykah Badu, and Mac Miller, and released his first two albums as Thundercat, 2011’s The Golden Age of Apocalypse and 2013’s Apocalypse.

His breakthrough came in 2015 by way of Kendrick Lamar’s career-making album To Pimp A Butterfly, which Bruner played a key role in crafting. “Everything [Lamar] does is on purpose,” Bruner told Rolling Stone that year, deflecting the newfound attention. “I was kind of taking his cue.” Still, the association stuck, and Bruner’s ensuing work has lived up to that album’s omnivorous vision.

That said, Bruner is no mere offshoot of Lamar; to sleep on Thundercat would be to ignore where crossover jazz is headed in the new decade. To celebrate the release of It Is What It Is, here’s Discogs’ guide to each of Thundercat‘s albums. Thundercat – The Golden Age of Apocalypse

Featuring immersive production by Flying Lotus and debuting Bruner’s translucent falsetto on record, The Golden Age of Apocalypse hits a potent seam between jazz, electronic music, and R&B. And the title, he said, referenced the generation that will see Armageddon.

“We’ve been in the last days a long time,” Bruner, who was raised in a Christian home, told L.A. Record in 2011. “Calling the album The Golden Age of Apocalypse… it’s a precursor. It means ‘Watch what’s going on around you.”

Despite its foreboding title, Thundercat‘s debut album teems with giddy creativity, the work of a sideman who finally gets to play in his own sandbox. “I’m the kind of guy who’s scatterbrained naturally,” Bruner admitted to L.A. Record. “I definitely have to give it up to Flying Lotus for his ability to [organize] things.”

The Golden Age of Apocalypse is a geyser of vibes more than songs, but it has no shortage of compelling material. In particular, “It Really Doesn’t Matter to You” and “Walkin’,” which were both co-produced by French bass innovator Hadrien Feraud, pack a well of feeling into their throbbing synth-and-bass soundworlds. In 2012, Bruner’s dear friend Austin Peralta, who contributed keyboards to The Golden Age of Apocalypse, died of viral pneumonia exacerbated by drugs and alcohol. Taking the loss hard, Thundercat named his second album after the moment the world ends — not the build-up.

“It scared me and made me really sad,” Bruner told L.A. Weekly that year. “I’ve never experienced anyone that close to me, that I would spend so much time with, just disappear[ing] like that.” He called Apocalypse “[painful] to listen [to] straight through,” explaining “so much went behind it.”

While The Golden Age of Apocalypse burns with optimism and ideas, Apocalypse stews in grief and shock — drones hover like fog, beats wander into walls, and chord progressions sadly circle in place like a shopping cart with a stuck wheel.

With a lesser writer at the controls, Apocalypse might have been an uncomfortable slog, but “Heartbreaks + Setbacks,” “Oh Sheit It’s X” and “A Message For Austin / Praise The Lord / Enter The Void,” full of resolve and aplomb, prove the old axiom that the best way out is always through. “I’m a touring musician, and everybody I know is an alcoholic,” Bruner stated flatly to Bass Player. “I’ve had friends die because of it, and I’ve had life-altering moments with people thanks to alcohol. It’s interweaved in our profession.”

He’s since slowed down on the sauce, but the topic informed Drunk, Bruner’s inspired third album featuring appearances from Lamar (“Walk On By“), Wiz Khalifa (“Drink Dat“), Pharrell (“The Turn Down“), Mac Miller (Japanese bonus track “Hi“), as well as unlikely heroes McDonald and Loggins (“Show You The Way”).

“They’re the kings of cool!” Bruner enthused about the widely-viewed-as-uncool 1970s stars. “What the hell do I have to offer these guys, you know?” (In 2017, McDonald and Loggins performed “Show You The Way” with Thundercat on The Tonight Show Starring Jimmy Fallon.)

Besides Bruner’s impressive Rolodex, Drunk is a lighter, more whimsical affair than Apocalypse, with a recited hygiene routine (“Captain Stupido,” essentially his “Vega-Tables“) a fantasy of cathood (“A Fan’s Mail [Tron Song Mach II],” complete with meows) and a love letter to Japanese culture (“Tokyo“) breaking up another solid batch of Thundercat grooves. Thundercat – It Is What It Is

Much like Apocalypse, It Is What It Is grapples with a friend’s death — this time that of Mac Miller in 2018. “When Mac died, I realized I couldn’t drink my way through it,” Bruner told The Washington Post in 2020. “I sat with it, let the pain in, and accepted that this would be a roller coaster.”

This newfound sense of acceptance led to It Is What It Is, the title of which carries shades of Zen Buddhism and the Serenity Prayer popular in twelve-step recovery meetings. During this time, Bruner largely kicked alcohol, went vegan, and lost 100 pounds, a transformation he said “freaked [him] out.”

While the album understandably hits some emotional turbulence, Bruner sounds renewed, like grief didn’t smother him but forged him. To watch a slimmer, more energetic Bruner rip on “Black Qualls” on Jimmy Kimmel Live! is to see an artist emboldened by a trial by fire.

“Sometimes, when I look behind, I see smoke and ashes,” he told The Washington Post. “I feel like I survived, but in a different form.” On It Is What It Is, Bruner doesn’t want to wallow — he wants to be in a party with you.

Music Addicts, Video Nerds, Information freaks, our community is looking to meet you all, Welcome.